What is Earth Overshoot Day?

You may have heard recently that Earth Overshoot Day fell on July 28 this year, with news coverage tinged with dismay at this date. This is because Earth Overshoot Day represents when the sum of human consumption and pollution exceeds the natural resources produced and services performed by the planet in a year.

Calculating when we arrive at this date is dependent on two concepts:

Global ecological overshoot occurs when the ecological footprint is greater than the planet’s biocapacity for that calendar year. Past this point, global activity takes place in an ecological debt akin to spending beyond our means.

The Global Footprint Network (GFN) explains that, at a national level, “A country has an ecological reserve if its footprint is smaller than its biocapacity; otherwise it is operating with an ecological deficit. The former are often referred to as ecological creditors, and the latter ecological debtors.” Comparing two neighbouring countries in the map below, Namibia is well in the green with a reserve of 3.8 global hectares (gha), whereas South Africa is operating at a –2.0 gha deficit. Click here to see how your country ranks. 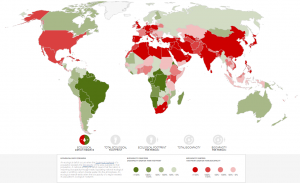 How is Earth Overshoot Day Predicted?

Global Footprint Network works out when global ecological overshoot is likely to take place by using data from the National Footprint and Biocapacity Accounts compiled by York University, Toronto, and the broader academic network at the Footprint Data Foundation (FoDaFO).

These Accounts are compilations of the footprints of more than 200 countries and territories, drawn from UN-affiliated data sets, the International Energy Agency, and peer-reviewed science publications.

The concept behind Earth Overshoot Day is to turn these thousands of evolving data points and improving calculation methodologies into something simple to understand. It is designed to focus public attention toward improved environmental management practices at all scales. In broad terms, an earlier date is greater cause for concern.

As the graph below shows, Earth Overshoot Day has been steadily moving earlier into the calendar year for the last half century. 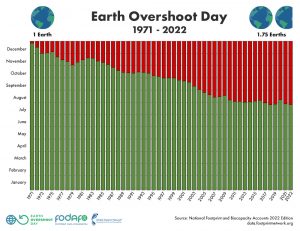 Any metric that spans such huge data sets will be open to certain criticisms. Some have argued that Overshoot Day is an oversimplification of lots of dramatically different ecological budgets and footprints. Flattening the contrasting economic and environmental management practices between nations into one outcome may give the appearance of equal responsibility for the deficit.

The range and precision of data in national accounts from which global balance is calculated changes annually. This can affect the overall accuracy of Earth Overshoot Day itself, as well as make comparison between years difficult. However, GFN works closely with a Standards Committee and National Accounts Committee to ensure that the accounts are as scientifically rigorous and consistent as possible. GFN also encourages national governments to conduct reviews of their country’s own footprint methodology and results. Governments that have done so include Switzerland, Japan, the United Kingdom, the European Commission, and the United Arab Emirates.

Shooting for the Stars?

In spite of the date inching closer every year, Earth Overshoot Day does not have to only be a cause for alarm. Its organisers emphasise that the day should drive impetus toward a range of solutions under the goal #movethedate.

Categorising solutions by planet, cities, energy, food, and population, this is a call to action for all. The known improvements to quality of life that are woven into these solutions – such as retrofitting of family housing for improved energy efficiency at a lower operating cost – strengthens the argument for moving the date.

Falling under the energy category, GFN estimates that carbon pricing is one solution that could delay Overshoot Day by as many as 63 days if a tonne of carbon emitted cost $100 in the United States. Placing a cost on carbon disincentivizes highly polluting activities and reminds polluters of the environmental implications of their actions. Revenue generated could be redirected into advancing carbon removal technologies, scaling renewable energy networks, or adapting climate change-vulnerable communities. This is the principle of the UNFCC’s Adaptation Fund, which is based on income from carbon offsetting credits sold through the Clean Development Mechanism.  Similarly, Net Zero Markets’ Global Emission Reduction is a offsetting contract with an increasing proportion of carbon removals projects rolled in, helping to fund these technologies and make them more commercially accessible over time.

If this is one of the ways in which you want to #movethedate, Plannet Zero can help. Every carbon credit sold directs investment into projects performing crucial carbon sequestration or emission avoidance services. Our selection of projects includes many with additional co-benefits, oriented toward protecting livelihoods on the front line of climate change. Take a look at one today.